A lot can happen in 10 minutes.

One million people will board a plane. 650,000 barrels of oil will be used. 3M tons of ice will melt in Antarctica. 1,130 children will be born into poverty. 10M plastic bottles will be thrown away (and hardly any of them re-cycled). 25,000 tons of garbage will be generated. And 1 animal species will disappear.

And in just 10 minutes, the world will generate the equivalent of 1GB of data for every human on the planet, with over 150,000 new devices being connected to the internet.

No wonder so many of us are stressed and anxious about the future and feel unable to do anything about it.

So where do you start?

You’re about to begin an exciting new project and you need to cut through all that data and get peoples attention? You want to communicate your vision? You want to help fight global warming? You want to campaign for better education or wider access to healthcare? Maybe you want to improve the working conditions for those around you?

Where do you start?

Well I think you start first by putting this quote on your wall because without an optimistic perspective, you’re not going to get anything useful done.

“Never doubt that a small committed group of thoughtful citizens can change the world. Why? Because it’s the only thing that ever has”. Margaret Mead

OK, now that you’ve done that, let’s have a look at your day.

The average person sleeps for just over 7 hours per day. The average person. Not your Ryan-Serhant-style-high-performers who can live on 4 hours of sleep, or the lazy ones among us who struggle to get out of bed. That leaves just under 17 hours per day when we’re awake. Or in other words, we have around 1,000 minutes per day to “DO” things.

So that made me wonder what else could we do in 10 minutes?

What if we broke our day down into blocks of 10 minutes at a time and we did short bursts of meaningful work, or prepared our minds to combat the challenges that we face?

You can also tell an amazing story in 10 minutes. In fact many of the highest rated and most watched TED talks are all under 10 minutes.

And this brings us to a really interesting point.

Because you have a story to tell.

One that might change some small corner of the world.

And I’m going to assume that you want to change the world or ‘make a dent in the universe’ because otherwise you wouldn’t still be reading this. So how do you tell a compelling story in under 10 minutes. Well the first thing you do is to stop convincing yourself that you need 20, 30 or 40 minutes to give a presentation. Contrary to popular belief, speaking for a long time is relatively easy. That doesn’t mean it will be any good. But meandering around for an hour isn’t that hard. Telling a short story is really difficult.

“If I am to speak ten minutes, I need a week for preparation; if an hour, I am ready now”. President Woodrow Wilson

It’s also important to remember, and I know this from personal experience having given hundreds of presentations, that the average attention span of an audience is 6-10 minutes. It’s not an accident that TED talks are 18 minutes long. They are 3 “acts” of 6 minutes each. And the best TED talks are structured accordingly.

This is the basis of all storytelling, screenplays and theatrical productions. It’s based upon a document called “Poetics” which was written by Aristotle over 2,300 years ago. I analysed Sir Ken Robinson’s TED talk recently because he used this format and it is (by a long way – 75M+ views) the most popular TED talk of all time and I wanted to understand what made it so popular. 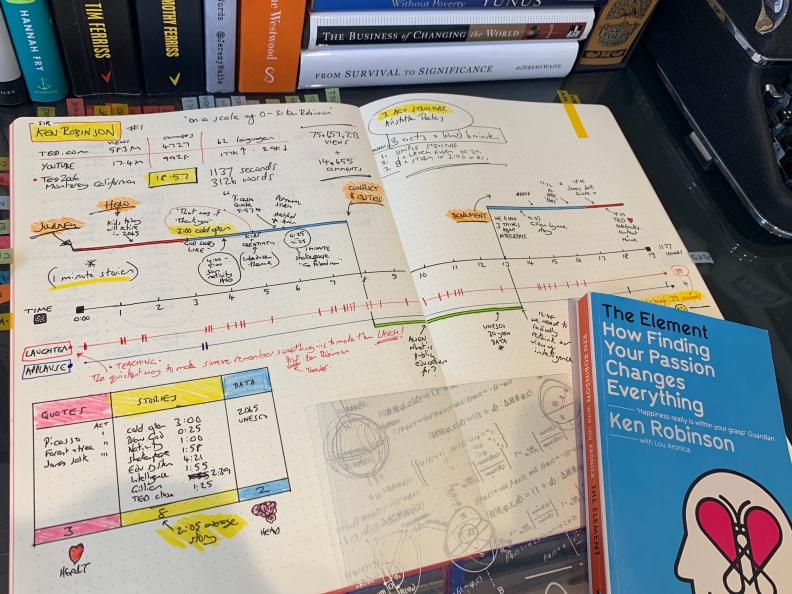 In that talk Ken spoke about educational reform and wanted to change the way that the world thought about education. Especially the way that we think about creativity. He used 3,126 words in just under 19 minutes, but what I thought was important was that his talk had those 3 parts in which he told 8 stories, with each story taking just over 2 minutes to tell.

So what if you don’t have the luxury of 19 minutes? What if you only have 10 minutes to get the attention of somebody important? Perhaps in a boardroom? Or parliament? Or what if you intentionally want to raise eyebrows when someone offers you 20 minutes to talk and you say, “I only need 10”. And your talk (providing it is good, obvs!) becomes the most memorable of the day.

Well this is what I am currently focused on because I am flying to America tomorrow to spend 3 days with Al Gore for this exact reason. Al Gore and his team at the Climate Reality project have developed a leadership program which they have called “The Truth in 10”. This is a program where they teach ambassadors how to give impactful speeches about climate change in 10 minutes or less. If you speak to most climate scientists, environmental activists or professors they will probably wax lyrical about the climate crisis for a long time. But they may have lost your attention half way through.

Journalists figured this out a long time ago. Especially in the tabloids. Many of the best journalists, especially political correspondents, write for what some would consider lesser-quality newspapers or media publishers because they have a special skill in distilling complex stories into small words and short sentences. That’s what Al Gore’s team is on a mission to do. They have already trained 12,000 climate evangelists to be able to tell stories in under 10 minutes.

Using experience gained from West Wing speech writers, Silicon Valley communications artists and presentation coaches, they believe that it is possible to change the world in 10 minutes by simplifying the complexity of the climate crisis into 1,800 words. Given the right environment, the right audience, good timing, an appropriate venue and a great deal of preparation.

Here are my notes and my first run through of the presentation if you’re interested. 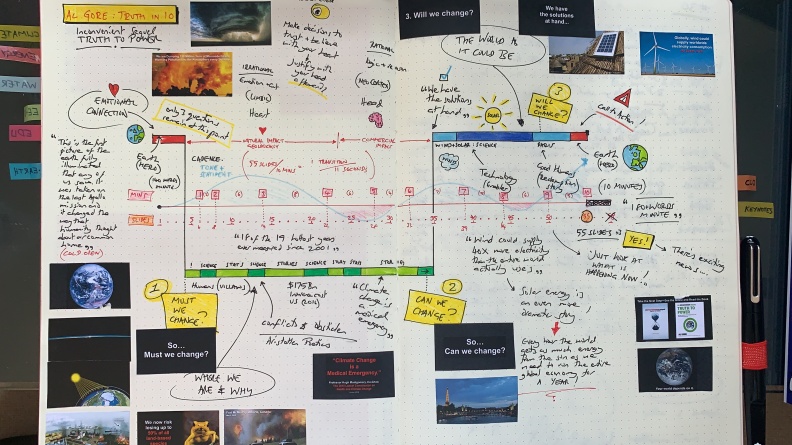 What I will learn from the Climate Reality team this week is how to make this talk my own. At the moment I am giving Al Gore’s talk which is really hard because he has a very specific personal style. It’s like a machine gun style of presenting with quick-fire stories, images and data. 55 slides. 10 minutes. Slide transitions every 11 seconds. Clever use of black slides which bring the audience’s attention back onto him and away from the screen. And unlike the average person who speaks at 120-150 words a minute, Al speaks at 180 words a minute. That’s hard. And not sustainable for long because the audience’s heads will explode.

So my challenge to you is to imagine what you could do in 10 minutes.

At 150 words a minute let’s say that you have 1,500 words to say something useful. Something that stops people in their tracks and makes them think. What would you say? How would you make if different from every other talk you’ve done? Or every other talk you’ve seen? Will you use visuals? Props? Slides? Video? Demo? How will you dress? What will you say in your “cold open”? Those first 3 minutes (450 words) that make everyone sit up and take notice?

I’ve seen marketing evangelist Gary Vaynerchuk take a 1 hour keynote slot and give just a 10 minute talk. By all accounts he was paid a fortune for that gig but he only spoke for roughly 10 minutes. The other 50 minutes he turned into Q&A because he thought that it would be “more valuable for the audience”. I’ll never forget that talk. It was different. It was memorable because he approached his keynote differently than every other speaker.

What could you do in 10 minutes to surprise your audience?

It’s a good challenge isn’t it?

Who knows, maybe you will change the world.